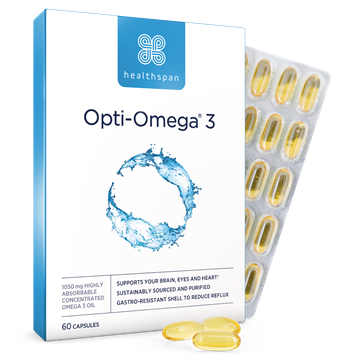 The views expressed in these reviews are the personal opinion of Healthspan customers. Healthspan does not endorse these views, nor should they be regarded as health claims or medical advice.

The views expressed in these reviews are the personal opinion of Healthspan customers. Healthspan does not endorse these views, nor should they be regarded as health claims or medical advice.

New and improved
Previously called Opti-Omega 3 600mg and 1,200mg, we are delighted to introduce a new and vastly improved formulation to our Opti-Omega 3 capsules. Contained within new gastro-resistant capsules to reduce acid-reflux, Opti-Omega 3 contains the highest levels of highly absorbable omega 3 within the Healthspan range, providing 750mg total omega 3 content per capsule and representing even better value than before.


What is Opti-Omega® 3?
Omega 3 fatty acids have a range of proven health benefits, and have long been recommended by health professionals and nutrition experts. DHA and EPA in particular are two fatty acids that can support your brain, eye and heart health in the right doses*. The UK’s Food Standards Agency still recommends eating two portions of fish every week, but if you don’t eat much fish, an omega 3 supplement is a great alternative to receive the benefits to your health. Unlike most other omega 3 supplements, Healthspan’s Opti-Omega® 3 uses omega 3 in the body-ready triglyceride (TG) form, which is more easily absorbed with better bioavailability. Each capsule provides 320mg EPA and 320 DHA.

Why is ours better?
This formulation uses a triglyceride form of omega 3 marine oil, meaning Opti-Omega 3 is better absorbed by the body compared to standard omega 3 fish oils. Our capsules also use an innovative gastro-resistant shell, which means the omega 3 oil is released in the intestine, rather than the stomach. Not only does this mean the omega 3 is better absorbed, it also helps to reduce acid reflux and the ‘fishy burps’ that are often associated with standard omega 3 supplements. What’s more, our omega 3 oil is sustainably sourced from the South Pacific Ocean and has received Friend of the Sea accreditation. This means it’s derived using methods that don’t over-exploit fish stocks, threaten the marine food chain, or harm the seabed or coral reefs.

Please click a heading below to open the relevant product information:

Swallow one to two capsules daily with water, or the dosage advised by a healthcare professional.


If you are taking any prescribed medication or have any medical conditions always consult your doctor or pharmacist before taking vitamins or supplements.

Food supplements should not be used as a substitute for a varied and balanced diet and a healthy lifestyle.

Store in a cool dry place, in original packaging, out of sight and reach of young children.

If you experience an adverse reaction, stop taking the supplement and seek medical advice.

We’re all different. Sometimes a supplement will suit one person but not another. If a product doesn’t suit you, stop taking it and we’ll be delighted to help you find an alternative.